Creating a React component and states from regex string matches

问题: I'm moving the frontend of a project I'd written primarily with php and jquery over to react as a learning exercise. So far it just seems to be making everything a bit more...
可以将文章内容翻译成中文,广告屏蔽插件会导致该功能失效:

I'm moving the frontend of a project I'd written primarily with php and jquery over to react as a learning exercise. So far it just seems to be making everything a bit more convoluted but I'm hoping I'll see the benefits soon. Right now it's just good to be familiarising myself with something far more current than what I was using. But I digress...

There's one particular situation I'm translating at the moment that feels simple to do in jquery but feels like I'm having to choose between a bunch of cumbersome or not-recommended solutions with react, such as dangerouslysetinnerhtml 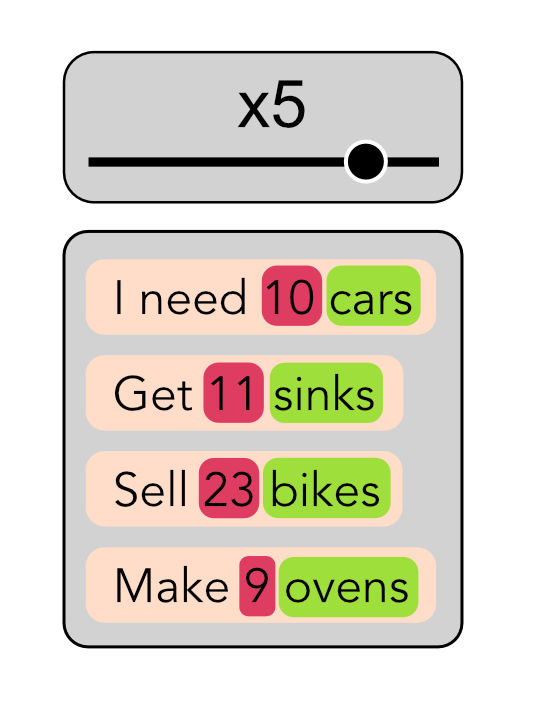 A user can input their own list, as raw text, which the app parses using regex to highlight quantities and items, illustrated above as highlighted by rose and green. New lines are parsed as list elements, highlighted in peach. The parsed quantities can be scaled using a range input, shown above the list. The example UI shows an example after parsing a raw string of text.

When I was using jquery I replaced regex matches with <span> elements containing data attributes to create new elements I could target. The quantity scaling function in the app could now reference the original quantity of a list item at any time using a data attribute.

With jquery, whenever the input range is dragged, I just target all elements on the page that have the quantity class, reference their data-count and replace the span value with the current range value multiplied by that data-count. This worked well.

As before, when I drag the input range, I want the quantities on the page to change to reflect the new scale set by a user. When picking up react I became familiar with component states and props and thought these would solve my problem beautifully. If I had a scale state I could pass it through the components and anything in the hierarchy could reference it. As I understood it, the hierarchy was important and it was important to hold the state at the top so that lower-level components could be 'fed' it, if that's a good way of putting it. This appeared to be best practice.

But I'm having a tough time getting it to jump through hoops. Maybe I've misunderstood?

If I've understood the hierarchy of states correctly, I'm setting the state initially inside the App() function, like so:

But I must use a callback function to change the state as the dialog range I'm using is nested a few levels down in components - passing it back to the state in the parent App() function and then back down to all the nested components using props. It felt much easier to just target elements with a matching class name in jquery and I'm not yet seeing the advantage of having components using states. I thought being able to target list item components with quantity states would have advantages in React that were more apparent.

Perhaps the main thing that has me stumped on how to proceed. In jquery, when I was parsing a raw string provided by the user, into html that I could target with specific classes, I just used some regex functions to return html that could be inserted into the dom. Example of the html is per the earlier example:

With react, I parse the same string to the same html fine, but I've no idea how to handle it from there, logically? If I return it and insert it, it is treated as raw text and renders the html tags on page. I can use dangerouslysetinnerhtml and it shows fine, but I've loud and clear got the message that this is heavily discouraged. I want to use best practices.

In fact, I likely don't want to be returning quantities wrapped in targetable classes. I gather that I want to be able to assign states to a list item component. I have absolutely no idea what's the best approach (logically) to do this with react. I could return an array from the regex parsing but this feels needlessly complex compared to replacing a matched sub string with a wrapped version of itself.

I feel at this point I may be approaching the translation wrong (or my understanding of using the component system and states) as this feels so much more convoluted than the jquery approach I was using.

That's not what dangerouslySetInnerHTML is about. It's about the fact that an unsanitized string containing HTML/JS could pose a security threat (XSS mostly). In other words, in React you have to explicitly use dangerouslySetInnerHTML if you need to be unsafe, but it's your responsibility to protect yourself, hence the name. Doesn't mean it's not recommended, just tells you to be extra careful.

the hierarchy was important and it was important to hold the state at the top so that lower-level components could be 'fed' it, if that's a good way of putting it.

Indeed, at first it might look overly complicated for no good reason. Today. A few months from now if you'll have to go through that code again, or worse, if someone else will have to, this structure enforcing rules and structure makes it far more easier to make changes. You can simply right click on the "callback" function and "go to definition" in your IDE of choice and see where it's defined, instead of hoping it's not hidden in some JS file or relying on search when the function is named "handleClick" in a project with one thousand click handlers.

Of course it was, anyone with minimal experience in a large scale project knows this. There always are trade-offs. You need to judge if it makes sense to loose simplicity for the sake of maintainability based on the scale of the project.

With react, I parse the same string to the same html fine, but I've no idea how to handle it from there, logically?

You are mixing parsing with generating HTML. You were parsing the string and generating HTML. With React you have to parse the string and generate JSX. If your code was separating these two concerns then it would have been a lot clearer what the difference is. Again, if you are the only one working on this and know you'll never touch it again, why bother separating these two parts? On the other hand if you do expect to touch that piece of code later or know there will be other people working on it then the smart option would be to split it so that you can properly unit test it.

I can use dangerouslysetinnerhtml and it shows fine, but I've loud and clear got the message that this is heavily discouraged. I want to use best practices.

No, that's not the point. If you use dangerouslySetInnerHTML then how are you going to interact with those highlighted numbers? document.querySelectorAll? That is indeed against the purpose of React. I think my answers above make it clear what a more suitable approach would be.

feels needlessly complex compared to replacing a matched sub string with a wrapped version of itself.

And it is because you don't understand why someone would use React. You think React is a replacement for jQuery and it is not. It is a way of writing JavaScript applications so that you don't end up with a pile of code no one can follow. Which is a problem that only exists if you eventually end up with a lot of code. Your application has what, 100 lines of JavaScript? Why are you even using jQuery?